As the International Day of Women is getting closer we wanted to honor one of the most influential Hispanic female artist of all time. Painter Frida Kahlo was a Mexican artist who was married to Diego Rivera and is still admired as a feminist icon. She began painting mostly self-portraits after she was severely injured in a bus accident. Kahlo was deeply influenced by indigenous Mexican culture, which is apparent in her use of bright colors and dramatic symbolism. 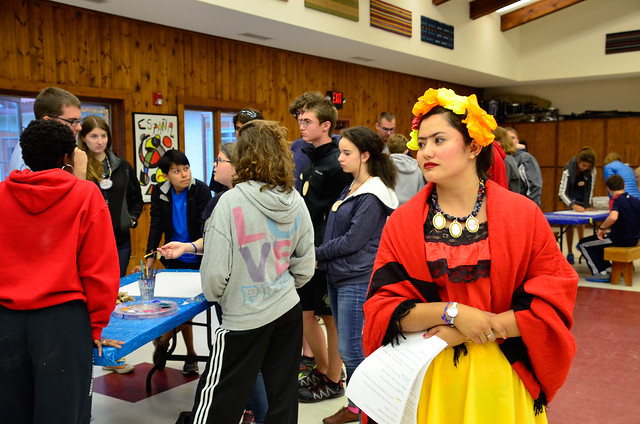 Her enduring importance to many as a key Mexican feminist is reflected in the floods of women (and men) who continue to visit La Casa Azul, her cobalt blue-walled former home in the city’s Coyoacán district.

For the women at the museum, Kahlo represents values such as “empowerment”, “freedom”, “independence”, “honesty” and “being true to yourself”. Or, as the director of the museum, Hilda Trujillo, puts it: “Frida did what she wanted. She was brave in a very conservative society. Young women today identify with Frida; they find strength in her, and they identify with that strength.”

At El Lago del Bosque we had the opportunity to let our four-week villagers talk to Frida face to face. Frida came for a visit with Diego Rivera and after reflecting on her life with the villagers she propose them to do art, to express themselves however they wanted and with different artistic techniques while asking her about her life and influence on the world.

Check Out Our Blogs