Thank you for visiting the blog for Al-Wāḥa, an Arabic Language Village. Subscribe by email to receive notifications of new posts directly to your inbox.

Ahlan wa sahlan bikom fi Al-Wāḥa! Welcome to Al-Wāḥa! Today was Opening Day, or yowm al-iftitah in Arabic. The villagers began arriving at 2 PM. The first station they went to was the check-in station or mahattat al-tasjeel. There they chose the Arabic name that would be theirs for the duration of their stay at the village. They also received their passport at this station.

The villagers also went to customs or al-jamarek, where forbidden items like technology and food were taken from the villagers and stored, followed by a visit to the nurse’s office.

Afterwards, villagers went to the nametag station to learn how to write their names. After they had mastered writing their name in Arabic, the villagers chose a wooden nametag or bitaqa, wrote their name down, and decorated the nametag.

Villagers also went to the bank or masraf to deposit money for use in the village store, which contains clothing and souvenirs, as well as candy, for purchase. Lastly, villagers took a language placement quiz to determine their level of Arabic. Villagers with free time played soccer or board games!

Once the villagers finished going through the opening day stations, they went to their cabins to create a cabin chant that they would use during meal times. They then went to Al-Quds, Al-Wāḥa’s dining hall, to put that chant to practice. Today, we ate a delicious meal consisting of hummus, shawarma or gyro meat, and tzatziki, which is a light yogurt dish.

After dinner, villagers attended the evening program, which consisted of a tour of the village. The tour included four stations: learning how to set a table in Al-Quds, basic rules for staying safe at the beach, how to exchange money from US dollars to Jordanian dinars and use it at the store, and lastly, how to stay protected from ticks at the nurse’s station.

Finally, all villagers and counselors gathered around the campfire to give thanks to those whom they appreciated that day, and to learn a few of the camp songs.

Thanks for checking in! See you tomorrow, inshallah! 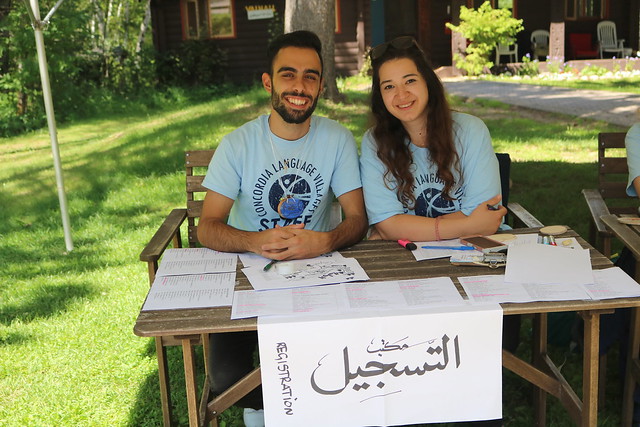