Thank you for visiting the blog for Al-Wāḥa, an Arabic Language Village. Subscribe by email to receive notifications of new posts directly to your inbox.

You are sleeping in, or trying to. Suddenly, the smell of boiling cabbage, meandering up from the kitchen, accosts your nose. What could it be?!

It can only be one thing: for lunch today, ma7shi.

Ma7shi is a popular dish of North Africa and the Middle East. Ma7shi literally translates to “stuffed.” It consists of various vegetables and leaves stuffed with a rice mix. Depending on where you are from, you might stuff cabbage leaves, grape leaves, green peppers, eggplants, zucchini, tomatoes, and even onions. The rice mix could have a tomatoe-y base (if you are from Egypt) or it could be more lemony and sour (for the stuffed grape leaves of Lebanon and Syria). In any case, ma7shi is undeniably delicious, and I can honestly say that it is truly a privilege to get to eat my mom’s ma7shi.

So now that your salivary glands are sufficiently stimulated, and your stomach, eagerly grumbling, allow me to lead you on a pictorial journey of making ma7shi.

First, you must wash your hands.

Then, wash your cabbage, green peppers, zucchini, and anything else you want to stuff (excluding your stomach).

Then, you must boil some water. Chop off the head of your cabbage, such that only the leaves of the cabbage remain. A few minutes after you have placed the cabbage in the water, you must attempt to separate the leaves from each other. Why boil the cabbage leaves in the first place? The leaves need to be tender enough to be rolled for stuffing. No one likes crunchy cabbage ma7shi. That being said, it is better to pick a cabbage with thin leaves rather than thick leaves, which tend to be stiffer and less delicious. How can you choose a thin-leaved cabbage? If you ask an Arab mom, she will probably complain about the state of cabbages in the United States, and enthusiastically praise the cabbage in Egypt, saying that each cabbage is the size of a watermelon, with leaves as delicate as a sheet of filo dough.

Grape leaves are usually bought ready from the store. However, they too should be boiled for about a minute in order to become less stiff.

As for other vegetables like zucchini, peppers, and eggplants, their prep involves removing their core, leaving only the outside skin.

Next, you need to prep the stuffing. You start off by adding some vegetable oil. Then add one chopped onion until it turns from white to gold-brown. Then add tomato puree, and two cubes of Maggi (adds chicken flavoring)! Next, add cumin, black pepper, and salt. Add chopped cilantro (important for the taste). I hear that fresh dill also really amps up the delicious taste of ma7shi. Then, add long-grain white rice (which you have washed beforehand). Mix all of these ingredients together, and you have your stuffing!

Next, cut your cabbage leaves and grape leaves to the size you want (smaller usually means a zingier taste). Then roll up your leaves with the rice stuffing, similarly to how you would roll sushi, but make sure to secure close the ends of the leaves by folding them so that rice doesn’t fall out.

For the non-leaf vegetables, all you need to do is put the stuffing where the core used to be. Do not fill the vegetable to the top, because rice expands when cooked!

Then, grab a large pot. In the bottom of the pot, add some extra cabbage leaves to prevent your ma7shi from getting burned. If you add uncooked thin-sliced potatoes on top of the cabbage leaves, you will find yourself with some grade-A tasty potatoes. Then you can start placing your non-leaf vegetables on top of the potatoes in a row, followed by your stuffed cabbage and stuffed grape leaves.

Then pour boiled fresh chicken stock into the pot until it is one inch about the surface of your stacked ma7shi. Then you turn the stove surface on high until the soup boils, then lower the heat to medium until it looks like the ma7shi has absorbed the soup, then to low for half an hour.

And you are done! Sa7tain wa 3afya! 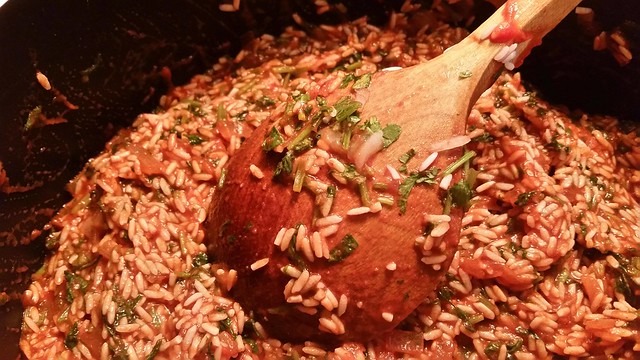